"The true painter strives to paint what can only be seen through his world." ~André Malraux


After a year of intermittant "painter's block"  I am working again in my studio, and feeling in a tentative positive state. Painting is a solitary activity, and as artists, we are often working in a vacuum. Unless we have a show hanging, reaction to the work is minimal. With several pieces underway, I decided that perhaps if I write about what I am doing or am attempting to do, it might act somewhat as a muse for me as well as give me some feedback on the work I am creating -- hence the establishment of this blog.

As for the blog title, traditional, representational painting is a language for expressing what’s visible. But I feel my work is the most successful, and most interesting, when focused on things not entirely visible. I paint what I see but also what I sense and feel by utilizing my interior and unseen world --- in other words, the invisible world. Plein air work or  studio work from photographs are only touchstones or landmarks which guide me to other inner spaces. By so doing, I find that I am pushing the boundaries between representational and abstract work.

You can enlarge the images in this blog by clicking on them.

As I created work for my October-November show currently hanging at the Zolikoffer Gallery in White River Junction, VT this spring and summer, I thought a lot about consistency again. This is a controversial subject in the art world -- often between gallery owners and the artists. The Gallery folk want to see a consistent style, palette, whatever, and be assured that the same type of work they signed on for with the artist will continue to come in from the artist. Gallery owners are looking for a common thread running through all of your work that holds it together, and makes it recognizable to their clients from one year to the next.

But we artists hear the word and feel a cold-sweat break out. We  understand the concept, and even see the validity of the gallery owner's viewpoint, but does it mean we don’t have any latitude to experiment and evolve? To my mind, real consistency can become a straightjacket to creativity. I remember how my friend Nancy Gerlach said, after leaving her successful pastel landscape stage and entering into the study of abstract printmaking in her 70's, that she just wasn't "THERE" anymore --  where the traditional landscapes had come from.

I know some painters, such as my friend Henry Isaacs,  maintain a very consistent and recognizable body of work throughout their careers. Others grow as their visions change, either rather abruptly and dramatically as Eric Aho did, moving from a realistic and simple, striking impressionism to his current expressive abstractions which are far more cluttered and busy.

What I have settled on, in an effort to be consistent but
also to evolve, is to utilize the same subject matter for periods at a time. By focusing upon only two subjects in the past few years, I did not become at all bored, but rather found that that the more time I spend painting the intricacies of forsythia and seascapes, the more I began to see that there is an infinite  variety in the nuances of any subject. I have done this before: early on in my serious painting career, I spent years on oversized up close in your
face flowers, mostly roses and iris. I did the same thing with horses -- in my past are a LOT of paintings of wildly flowing manes and horses' eyes.

Constable went from painting a realistic landscape to an expressive one. There are a few whose work underwent quite dramatic change over a short period of time, such as
Philip Guston who turned away from abstraction towards a narrative representation, combining a cartoon style with the luscious brushwork of his abstract paintings. I remember the shock of seeing this new body of work, and how long it took for viewers to accept it. I can imagine him just being tired of making those beautiful paintings, and wanting to shake things up.

For this show, "Old Friends, New Work" I am showing mostly my new seascapes, or rather my four-piece series of
the place where the wave spill meets the sand on a beach,
the seafoam, which I call  " ... where the dark, wet sand turns grey"  One of them sold at the show, which is kind of too bad, because they make the most impact as a group. But that gets rather pricey. This is truly where my heart is right now, I guess you could call that spot at the water's edge my muse.

This body of work upon which I have concentrated most heavily for the past five years are my seascapes. Not only because that is what the gallery in Nantucket which handles my work prefers, but also because, I am at my best physically and spiritually when I am at the edge of the sea.
These paintings are the result of inspiration from the dynamic interactions between light, color and movement found on the sand by the sea ... the constant ebb and flow of the tides, the changing patterns of wind and surf, the sand just as it meets the water.

This is the raw material from which I try to move beyond
the particular into the eternal, suggesting the transient life of the waves within the larger permanence of nature -- and our brief passage through it.


I must have taken 50 photos of it this summer both in Nantucket and in LBI. Here are two examples of this painterly obsession.


As well as seascapes, I am also drawn to the barns and outbuildings of Vermont's vanishing farms for subject matter.  Like seafoam, the barns have begun their journey into nothingness. I paint the spindrift, the waves, and the seafoam because it is so ephemeral and heart-breakingly beautiful. I paint the far more representational barns
because their simple dignity, in the face of their diminished value, speaks to me of emptiness and sadness, abandonment in the face of progress, and the hard work of long ago lives.

The barn paintings are my efforts to honor and save the aged architecture surrounding me here in Vermont – I love the haunting imperfect lines of the buildings, the wonderful textural faded paint and rusted roofing, the lack of  symmetry of windows and doorways, and the  memories memories of lives lived.


Several years ago I also discovered the joy of painting forsythia, which offers a wondrous way to dive into pure
painterly joy; several of the barn paintings in the show incorporate these yellow harbingers of spring.
The one on the top is my most recent barn, titled "Dusty With September Sun."

Several other barns are in this show -- which will be up until November 19.

You can see some barns in the photo below from the opening of the show on the right, next to two horizontal paintings done by the other woman in the joint show, Judith Pettingell who lives in the area. Judith and I were classmates at Skidmore College, and connected these many years later when I moved here in 1997. Hence the name of the show --  "Old Friends, New Work." Judith and I met in
the Hathorn Studio classrooms, where we learned some basics from the same art professors. 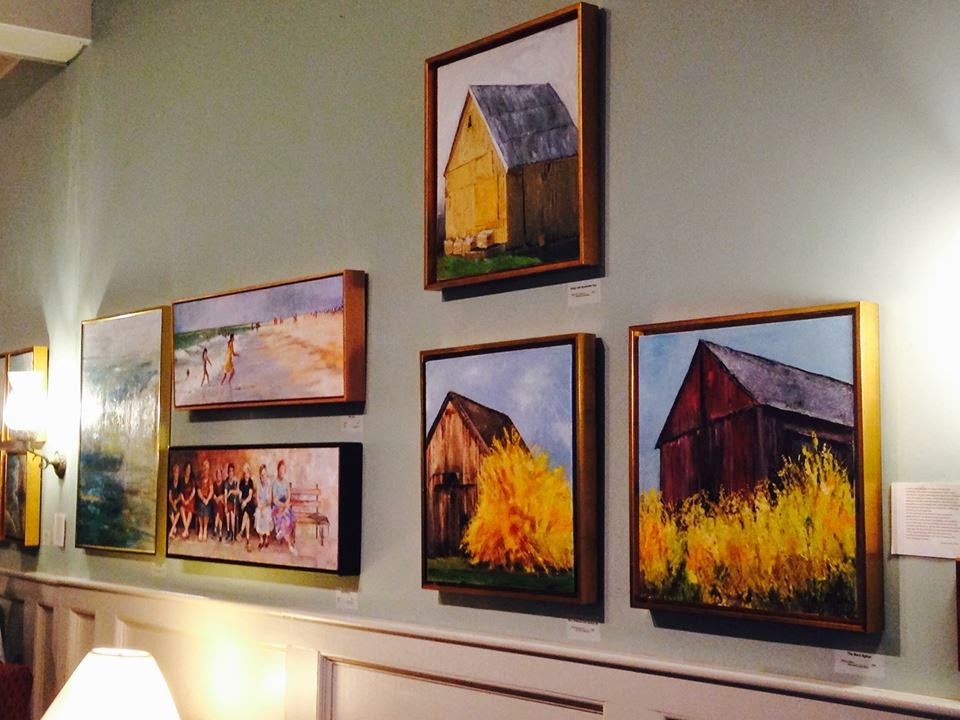 Another burgeoning interest for me right now are trees catching the sunlight. I had hoped to make this very large painting, below, the focal point of the show. However, I exhibited it at the Morrill Homestead 4th of July show, priced it high so it would not sell -- and some woman from Connecticut bought it and whisked it away.

Right now I am working on a very difficult commission for a man from Boston who wants a painting of his Vermont house pond, and I am also about to complete another tree painting in the above mode, done ALMOST alla prima! It is truly wonderful when that happens, when it all comes together so fast....I only wish the commission was going that way. But I think I made a breakthrough today!

So, is my work consistent? Not really probably. It is in subject groupings, and I handle paint similarly in all, but I am not at all sure it shows much commonality. So be it.

Email ThisBlogThis!Share to TwitterShare to FacebookShare to Pinterest
Labels: Other Artists, painting, Shows 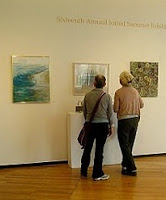 "In The Language of Blue and Gold" hanging at AVA Gallery's 16th Annual Juried Show. Currently at Long River Gallery in Lyme, NH..

In The Language of Blue and Gold 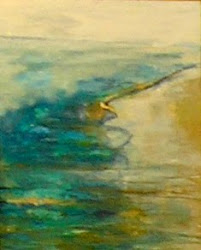